Farming has long been a way of life for many people in eastern Oregon, and that means access to irrigation water is vital. It was for this purpose that Owyhee Dam was constructed on the Owyhee River in 1928 (completed in 1932), and it now services over 100,000 acres of farmland in the surrounding region, including part of southern Idaho. The dam was also used to test new construction techniques that would eventually be used to build Hoover Dam. For a short time, it was the tallest dam in the world at 417 feet. (The Story of the Owyhee Project, 2003)

A few weeks back, I was lucky enough to go on a complete tour of the Owyhee Dam, which is not normally open to the public. This actually wasn’t my first tour – I had gotten to visit when I was in elementary school during a field trip, many years ago. Since then the dam has been added to the National Register of Historic Places, which will help to preserve its history, but also results in extra hassle to perform maintenance and repairs.

Top of the dam.

With the heavy snowfall this past winter, the Owyhee Reservoir was nearing maximum capacity for the first time in six years, which meant the glory hole spillway and valve house were both in operation. Ideally the valve house is used to control the release of water from the reservoir, but the glory hole was left running since it was continuing to draw visitors.

The glory hole, some visitors, and the beginning of Owyhee Reservoir. 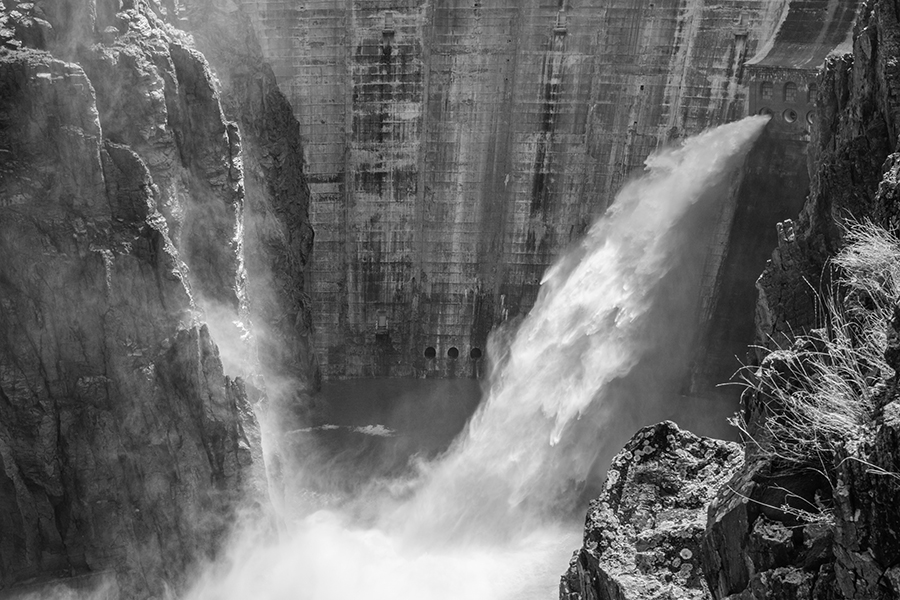 The valve house with one of its three gates open.

One of the dam entrances is from the top, down a spiral staircase that leads to a long, narrow corridor. Toward the end of the corridor is a freight elevator (the first of its kind to be installed in any dam), which provides convenient access to the lower parts of the dam.

One of the long corridors inside Owyhee Dam.

Several main corridors run along the width of the dam at different elevations. Other passages branch off from them, leading to different areas. There are many pipes, gauges, and pumps throughout the structure, partly because a water system is used to cool the concrete. Some of the hallways lead to inspection galleries that offer some incredible perspectives (and a slight misting).

Below the valve house.

The view downriver from an inspection gallery.

There is an entrance at the bottom of the dam, but at high water levels it’s not extremely useful as such. It does give access to a powerhouse that can occasionally be used to generate electricity.

A view from the powerhouse. The crest of the dam is visible near the top of the photo.

Northwest from the base of the dam is a compound where hundreds of workers used to live during the dam’s construction. It is now a park and visitor center.

A view to the northwest from the top of Owyhee Dam.

All in all, it was a very remarkable and informative experience, and the opportunity for some great photos was an added bonus. A special thanks goes to Jay and Rex for providing a fantastic tour. If you would like to learn more about the Owyhee Dam and its history, you can visit the links below, or perhaps someday be able to visit in person.

Reference:
The Story of the Owyhee Project [Brochure]. (2003) N.P.: U.S. Department of the Interior, Bureau of Reclamation.

Flowers, bugs, leaves, landscapes,… I photograph all of these things, and more, as I develop my photography skills while exploring my backyard and beyond.